A stun gun is a handy self defense weapon, here is all you need to know about inner workings of a stun gun to make it work for you
Stun guns are extremely effective self defense weapons. The ingenious design and ease to carry makes them extremely popular amongst many ordinary citizens as well as law enforcement officers alike.
A stun gun makes use of electrical discharge (voltage) through electric prongs embedded in its design. The volts (typically under 30000V) go through the skin of the person and can temporarily incapacitate them. Stun guns are not lethal weapons because a stun gun works on low amperage. But still, it is an ideal self defense tool to disarm your attacker.
Effects of a stun gun on the body
When a person's body comes into contact with the target and the voltage is discharged into the skin, it directly attacks the nervous system of the body. The nerves going straight to the muscles will now be discharging a higher current wave to them.
Read to Know Smart & Advantageous Variations of Stun Guns for Self Defense
This higher current makes a muscle unable to contract and relax properly and muscle starts moving rapidly but unrhythmically. When muscles malfunction, the blood circulation is disrupted leaving vital body organs without enough glucose.
Glucose deficiency inside the body cells then causes the body to convert stored glucose and fats into lactic acid. While lactic acid keeps the body organs functional, most muscles will not have enough energy to mobilize the limbs. Body starts becoming weaker and neurons are all over the place. This makes the person weary and dizzy and ultimately unconscious.
Once the body comes back from its disrupted neurotic state (after 30 mins) and it does-then a person regains mobilization and consciousness and there is no lasting damage to vital body organs. This is how stun guns work.

The Time Factor of Stun Guns

Ideally, you should attach the stun gun's electric prongs to the attacker for at least 3-5 seconds to be sure the stun gas has stunned him. But anywhere between half a second to one full second of full body contact will dislodge enough amperage to male the stun gun work its magic. 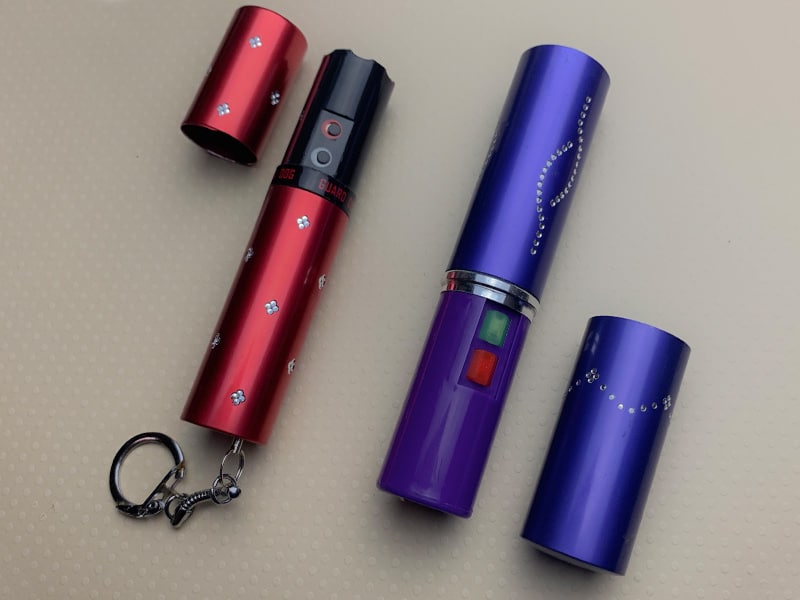 That magic however, is limited to the attacker losing his bearings, giving your precious seconds to make a dash out of the scary situation. If you feel you can keep the stun gun in contact for around two seconds, the stun gun works better and the attacker will have disruptive muscle movement.
We know practically, that using a stun gun on the attacker for five seconds is highly unlikely especially if he is physically violent, but if you manage to do that, then the stun gun will work to its full potential and completely immobilize  the attacker, making him lose his wits.
Perhaps what makes a stun gun such a widely used self defense, is how safe it is to deploy. Unlike a pepper spray that holds the chances of it blowing back and causing you harm, a stun gun causes no adverse effect to the user's hand or body. A stun gun will not transmit its electric shock to you even if the stunned attacker is holding you. You can also safely use the stun gun underwater and you will not get electrocuted.
This makes a stun gun a comparatively safer self defense weapon to use, regardless of how the attacker retaliates after having been inflicted by this self defense weapon.
If you manage to jam the stun gun into the attacker's body for up to five seconds, he will crash and can remain unconscious for thirty minutes or more. This makes a stun gun a perfect non lethal self defense tool since this time it buys you is beyond enough for you to seek safely. Secondly, it doesn't inflict permanent damage on the attacker making it ideal to be used to just control some troublemaker.
Stun gun can be used as a self defense tool encase it is perfectly sized to be carried around anywhere and everywhere within your pocket or bag. If you want to carry it at your waist, a stun gun can be bought with a holster and a clip making it perfect everyday carry self defense weapon.
For best results use a stun gun on a part of the body which does not have mobility. So legs and arms are bad options. Go for a more wide and fixed area like shoulder or abdomen so that a stun gun can remain in contact with the attacker for a maximum amount of time without him jerking away from it.

Internal Mechanism of a Stun Gun

Now you know how a stun gun works externally. But there is a whole lot going on internally which can be handy to know about. We already know stun guns disrupt the nervous system of a body by unloading its own electric discharge on it.
Even if advanced high range stun guns used by security officials that have the power to produce up to 30,000 V are used, a stun gun will not have that much electric current passing through the person's body. Ampere is the unit of current and most stun guns don't have high amperage making them non lethal self defense weapons.
So the electric charge entering a person's body will not have enough power to travel inside the body for long periods of time. Due to high voltage it can enter the body easily through thick layers of clothes and skin but along the way it loses out much of its energy.
When the charge is at 3mA, it fizzles out completely unless you keep pressing the stun gun onto the attacker to provide it with more power.
Once the charge has intermingled with the body's own charge driven nervous system, disruption starts happening. The neurons going to the brain now carry extra load that confuses the intricate communication system of the brain.
What Can Women Carry For Self Defense? Here are Some Expert Suggestions!
A person will start becoming dazed and just unable to decipher anything happening around him. When the same malfunction occurs at the muscular level, a person loses balance due to muscular coordination, and ultimately becomes paralyzed and unconscious.
You might think extra electric charge may make a person's organ work at higher capacity. Well it's true. But the charge was unneeded and creates more problems due to body'own own current signals not understanding the new charge being interspersed with it.
The spasmodic motion of muscles is a result of this confusion which drains a body completely, making it weaker by the second.
This is why a stun gun can be used anywhere on the body because the nerve cells are an extended network inside the body connecting with each muscle and organ. Wherever you attack, you can get the desired result. This feature makes stun guns easier to use self defense weapons.

How a Stun Gun is Constructed?

Stun guns come in various shapes and designs, but most have a recurring feature of being small enough to be easily carried around in your pocket. A stun gun is also mostly shaped like an everyday object so as to not to attack suspicious attention from passers by.
Stun gun can be bought in the shape of a lipstick, a pen, a flashlight or what not. Most of these stun guns will have 9-volt batteries and an added LED light feature.
The circuit design of a stun gun consists of transformers, oscillators and capacitors. The batteries provide the required charge to the transformers, the transformers multiply the voltage manifolds depending upon the power of a stun gun. Most high range stun guns can produce up to 150 000 Volts if designed correctly.
The oscillators manage the current pulse. The pulse charges the capacitor. Once the capacitor is charged it releases the current to the electrodes where the output of a stun gun is achieved.
The electrodes are located on the outer edges of the circuit that are charged but have vacuum between them. An attacker's skin then potentially becomes the conductor that fills this vacuum causing electricity to travel from one electrode to another, completing the circuit by travelling through the person' body and stunning them.
Some stun guns are armed with a warning sound feature. This is a typical whining noise created by some stun guns to let the attacker know you are in possession of a self defense weapon that you will deploy should he come any closer.
This feature is made possible by addition of another pair of electrodes to the circuitry of the typical stun gun mentioned above. The difference is that this extra pair is close enough that electric charges can jump from one electrode to another without the need of a conductor.
As charges leap through the air, they make the sound that can scare off any attacker. You must have heard the electric buzzing sounds in a malfunctioning radio or bulb.

How to Use a Stun Gun?

The inner mechanics of a stun gun may look ominous but for you, an ordinary citizen trying to protect his or herself, stun guns are as easy to use as any other electrical equipment of everyday life. A press of a button at the right time and in the right place can go a long way from preventing you from being robbed on a deserted street to potentially saving your life.
You need to be already alert when walking through deserted places when you are alone. An empty parking lot or a secluded hiking track are ideal places to make you a target of some robber or assaulter. Have your guard up even before you feel someone is approaching.
Look at The Most Powerful Stun Gun for Self Defense - Review
Once the attacker is upon you, select the widest and most muscular set of body areas to inflict maximum harm on the attacker. A chest, stomach and even hip will allow you to use your stun gun for more seconds. These extra seconds are crucial for the stun gun to work to its fullest potential, that is to render the person  paralysed and unconscious.
Now the stun gun and you have done the job. Run away and alarm local authorities as soon as possible. Your handy stun gun has easily saved you from bodily harm.

No matter which design of stun gun you ultimately go with, a stun gun works safely but ominously to protect you. These stun guns come with no personal hassle as they are easy to carry. Stun guns work in a way that these can never harm you, so use a stun gun as your self defense weapon and never fear going out alone or in the dark ever again.
Read Also: Stun Gun VS Pepper Spray - Comparing the Two Self Defense Weapons!
Blog Home
Categories
Recent Posts
Archives
SHOW SIDEBAR