The Most Powerful Stun Gun for Self Defense - Review

What is a Stun Gun?

Stun gun is basically an electroshock device or weapon which delivers an electrical shock. It is a small sized weapon, able to be carried in the pocket.
There are different shapes and designs of this weapon, but there is one thing common in all devices. There are always two prongs on them.
These prongs do the job actually. When they are touched to the body of the attacker, they deliver a powerful electrical shock.
This electrical shock is not responsible for inflicting injuries. Rather, it just immobilizes the attacker for some time.
Most importantly, it lets you survive against the attackers by keeping the attacker immobilized so that you can escape and save your life.

Which is the Most Powerful Stun Gun?

The most powerful stun gun is the Monster’s 25 Million Volt Rechargeable Stun Gun With LED Light. With the power of 25 million volts, it is the most powerful electroshock device. 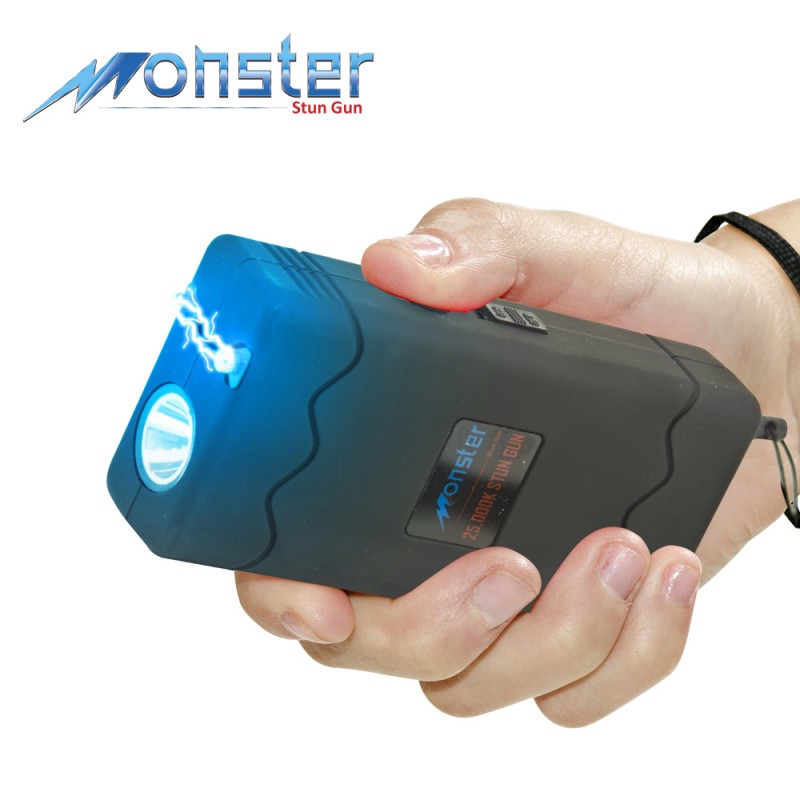 But, the power does not only make it powerful, there are many other factors, mainly its features.
This is a brief review of this stun gun. We are exploring its features that make it the most powerful stun gun. Also, we explore the benefits of using it for self defense. So, let’s initiate the review:

The most significant feature of this stun gun is the power. It is a 25 million volt electroshock device. Believe it or not, it is an enormous power. You can feel the power once you use it.

The second important feature of this device is the LED light. It features an LED light which can illuminate the small area.
Even when you are outdoors, it can illuminate your surroundings that you can easily see what’s going on around you. Also, you can see someone coming towards you from a reasonable distance, and that distance is enough.

Disable pin is another powerful feature which makes it safe to test. When you want to test the device, you can use this disable pin to deactivate the stun feature of the device.
This is also there to avoid damage caused to the owner. If someone snatches it from you, the disable pin can be used to deactivate this feature and hence he can’t use it on you.

This stun gun comes with a sleek nylon holster as well. Also, there is a belt loop that allows you to carry it anywhere you want in a comfortable manner.

It comes with a rechargeable battery. This battery is built in, and is not needed to be incorporated or replaced.
However, it can be recharged using a small built in charger. This charger is usually concealed inside the device and can be pulled out when needed to recharge the device.

Reviewing this Stun Gun from Self Defense Perspective

Yes, this 25 million volt stun gun is extremely powerful, but is it effective for self defense? We have reviewed its features, now, we must explore its benefits for self defense, and its effectiveness against the attackers.

The comfort and ease of carrying this stun gun is unmatchable. There is no other weapon that offers such comfort.
Of course, there is always a concern when you are carrying a weapon in your pocket. But, such distress is not caused by this excellent electroshock device.
It is extremely small and fits well into the pocket. Plus, there is no weight at all. So, it is easy to carry it in the pocket.
Secondly, there is a safety switch which allows you to turn it off while carrying it in the pocket. Therefore, you are safe while carrying it and prevent any accidental damage.

- Very Simple to Use

The second significant advantage of this stun gun is the ease of using it. It is perhaps the easiest to use weapon around.
Remember there are two prongs on this device. These prongs can be touched to the attacker to deliver the electrical shock. Yes, that’s it.
You can touch the prongs to any part of his body and a 25 million volt shock would do the job for you. It would immobilize him for some time. Yes, this is how simply it works.

Many self defense weapons nowadays take time to take attackers down. But, this stun gun is by far the quickest to do so.
It inflicts damage quickly. How quickly? As you touch the attacker’s body with the two prongs on the device, a powerful electrical shock of 25 million volts is delivered.
This powerful electrical shock is enough to immobilize the attacker for a long time. Meanwhile. You are allowed to escape and save yourself from a potential attack.

- The Advantage of Light

Finally, the best advantage of this powerful stun gun is its LED light which allows you to illuminate your surroundings.
Most attacks happen at midnight because the attackers take advantage of the dark. But, if you can enlighten your path, you have every chance to survive.
This small LED light has the ability to enlighten a significant area so that you can see an attacker coming towards you from a distance. Hence, you can get ready to face him.

This 25 million volt stun gun is easily the most powerful electroshock device. It possesses some splendid features and offers many self defense advantages.
The power of this stun gun, the LED light, the quick effect, the ease of use, the safety features, and the ease of carrying it makes it the most effective weapon for self defense!
Blog Home
Categories
Recent Posts
Archives
SHOW SIDEBAR