Today we are going to discuss daggers and specifically push daggers. But before that let me ask you a question, have you ever watched historical movies or do you have some knowledge about.

My fascination for daggers was initiated when I started to watch historical and science fiction movies.

In some movies, the daggers were used to perform ceremonial and ritual acts while in the others, they were carried by people as a self-defense tool or as a weapon.

This one particular movie known as “The Hunted” which I liked pretty much, featured the use of push daggers specifically and from there my fascination for them started and grew over the time when I started to research about them and also started gathering some unique push daggers which, to be honest, are masterpieces.

I am telling you all of this because I am hoping that maybe this article will be your motivation towards exploring historical artifacts and getting to know more about them.

Let us have a brief overview of daggers before we move on to one of their most common and popular type known as the push daggers.

A Brief Overview of Daggers

The daggers were quite famous in the Medieval era. In fact, people used daggers more than they used knives. The word dagger is known to be derived from a Latin word “daca” which means a Dacian knife.

A dagger is actually a knife but is shorter in length. Its distinguishing feature is its double-edged blade that ends up on a pointed tip.

This particular design of a dagger makes them quite effective for stabbing and thrusting and its tip can be used for piercing and stuff like that.

The daggers can be used as weapons in one-on-one combats but mainly they were used as self-defense weapons or as tools for performing ritual killing or sacred ceremonial acts.

People used to carry daggers with them almost all the times and used them for self-defense purposes and for utility purposes as well.

Some Interesting Facts about Daggers

The daggers are one of the most popular weapons of the Medieval era. Here are some interesting and basic facts about them.

1- Daggers are the earliest versions of knives. Even their origin is not truly known and this is why they are one of the antique weapons of human history.
2- A dagger is one weapon but has many different designs and types i.e. push daggers, basilard daggers, bollock daggers etc. They come in a variety of different blade types and hilt shapes and each one of these types has its own style and essence and is effective for one specific use.
3- Daggers were used by the people Medieval era more as a weapon to be sued in close quarter combats than as utility tools.
4- The length of a dagger is usually between six to twenty inches.
5- A dagger may have a single-edged blade or a double-edged blade.
6- Some daggers of the Medieval era were longer than the standard length and that is why they were also known as short swords.

A Push dagger is actually known as a push dirk, fist knife, push knife, punch knife or a T-shaped dagger. It is a short dagger and its distinguishing feature is its T-shaped handle which makes it quite effective stabbing and thrusting.

This particular design helps you grasp the handle securely in the palm of your hand and thrust the straight and razor sharp blade into the target.

The specialty of this T-shaped design is that when you rest the handle of the dagger against your palm, the blade protrudes from the forefinger and the middle finger of that hand which provides more thrusting and stabbing force.

Push daggers are mostly short in size and are about the size of a palm. This is why they are easily concealable and were used mostly for assassinations in earlier times.

They do their work discretely and mostly come in protective sheaths which makes carrying them easier and also protects the owner from unwanted injuries.

As they are known as highly concealable weapons, therefore, their sheaths are also designed for a quick and easy draw mostly with a single hand.

Push daggers can prove to be deadly if you know how to use them properly. They are multi-purpose weapons and apart from their use as highly effective self-defense weapons, they can also be used to perform general tasks of daily use.

Push daggers are only legal in very few countries because of their deadly nature. Countries like Canada and the United States have also declared the illegal and impose heavy taxes or take strict action against those who are even found manufacturing, selling, owning or using push daggers.

They are equally famous among civilians as well as among the military. Push daggers can be carried in multiple ways. You can carry them as neck knives or as boot knives. However, you can also carry them on your waistband, belt or on your thigh rig as well.

Push daggers as any other weapon or tool have their advantages as well as disadvantages.

1- A push dagger is quite effective for slashing and stabbing but when it comes to slashing, they are not that effective.
2- Also, you can surely use a push dagger for utility purposes but it is quite difficult to carry out those chores with it because of its T-shaped design.
3- Moreover, there are many laws and legalities revolving around the use of push daggers which makes it very hard to acquire them in regions where they are prohibited or are illegal to use.

The History of Push Daggers

Push daggers are said to be originated from the Katar sword of the subcontinent. However, let us have a detailed overview of the history of push daggers.

In earlier times, daggers were kept by everyone to be used as a self-defense weapon. Back then, there was no restriction on carrying or using weapons as even the politicians used to carry them openly in legislative buildings and courthouses.

The push dagger then became popular in Germany as the “fist knife” and continued to grow popular all over the world. This weapon was easy to hide and this is why it was a very favorable choice for people of all ages whenever they needed a self-defense weapon for themselves.

Also, before the invention of proper firearms, these daggers were used and carried by the gamblers, military people and people who lived in the rough neighborhood as weapons to be used for self-defense and in combats and fights.

World War 1, as we all know is famous for the trench war system. Numerous trenches were dug up to thousands of miles to keep the enemy away.

Trenches led to hand combats between people from sides which required the use of an effective weapon that could be used in close quarter combats. Many stabbing weapons were designed and push daggers were one of them.

Again, during World War 1, these daggers became popular and people started using them. One factor of their popularity and fame was the shortage of guns and revolvers.

They were expensive and everyone did not have access to them so a cheaper and more suitable weapon were these stabbing weapons i.e. brass knuckle knives and push daggers.

The military issued many push daggers to the soldiers which they used against the enemy. Even during World War II, these daggers were issued to the commandos of Britain for using them in close quarter engagements.

A Gimlet Knife was a stylishly designed modern push dagger. It was a popular weapon of the city of New Orleans in the 1800s. Also, it was a small dagger having a blade of about two inches and a T-shaped handle which was also called a gimlet.

Due, to this small design, this dagger was used as a boot knife as well and people would hide them inside their boots as hidden blades or inside the sleeves of their coats as well.

There was one other way by which people used to carry these push daggers; they would put them in a sheath and use the strap of the sheath to tie it to their waistcoat button so they can have close access to the dagger.

However, the popularity of Gimlet knives among the people of New Orleans led to a rise in crimes i.e. murders, fights, and robberies which forced the government to prohibit the use and carry of these knives.

Later, during the 19th century, an updated version of these push daggers became very popular in San Francisco, California. This one had a longer blade than the Gimlet knife and the handle of these daggers was mostly made up of ivory gathered from walrus.

Things You Should Look for In a Push Dagger

There are many types of push dagger available in stores all over the world. Some of them may be the same while the others would differ in their designs, types, construction materials, and stuff.

No matter how many of them are available in the market, only a few push daggers are the best.

So, if you want to buy a push dagger for yourself, then how would you know that which one is the best one and most importantly what should be the things that you should look for while buying a push dagger.

Here is a list of some features that you should always take into account while buying a push dagger and they will surely help you make the right choice for yourself.

Weight is a very important factor on which you should focus on. A heavier tool or weapon is never a good option. Therefore, always look for a push dagger which is light in weight so you can carry it around easily.

Moreover, a light-weighted push dagger allows you to feel comfortable while carrying or using it as a heavier one will always cause you inconvenience.

As a push dagger is to be used mostly as a self-defense weapon, therefore, you must choose a push dagger which is easily concealable. Now that depends on the design and size of the dagger.

You must look at the specification of the push dagger you are buying. Always go for the one which features a razor-sharp blade. However, whether you want to go for stainless steel blade or a carbon steel blade is solely up to you.

Go for those push daggers which are cost-effective. Therefore, choose the ones which provide decent quality in reasonable rates.

Daggers and knives usually come in protective sheaths. So, go for those push daggers which come with these sheaths and sheaths make it easier to carry the daggers and they also protect the owner against unnecessary injuries.

The grip of a dagger should always be ergonomic so that the holder that grip it securely and comfortably as well. A comfortable grip also facilitates using the dagger properly and safely.

Push Daggers prove to be quite effective self-defense weapons. However, as they are out of fashion now, people use them as historical artifacts for collection purposes. 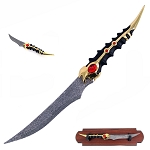 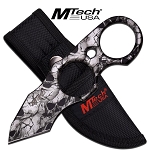 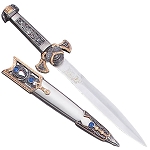 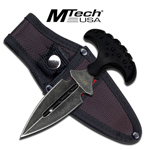 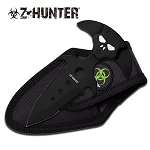