Trench knife is known to be a historical knife. It has been popular all over the world, especially in the US since it served during the First World War. Actually, it is known for its use in World War I.
Perhaps, we might not have been familiar with this knife if it was not used during that war.
Today, we have brass knuckle knives in the market that are actually trench knives. But, many people seem confused about them. A few believe that these are two different knives while a few believe that they are similar.
Well, by the appearance, shape and design, these two knives are similar. So, where is that difference? Why are there two names for one knife? In fact, these are really two different names for one knife.
A knife that was traditionally known as a trench knife is the modern day’s brass knuckle knife. As you all know that things improve with the passage of time. If not improved, there are alterations made to them.
So, one can say that there are a few changes made to the traditional knife, and obviously one of them is the name.
In this article, we are focusing on the traditional trench knife and the modern-day trench knife. We shall explore the history and how it transformed into a knuckle knife. So, let’s begin with a slight introduction of the knife.

Before exploring what is a trench knife, we must plunge into the reasons behind its name. Where that name “trench” came from? Well, we need to go back to the First World War.
Remember the war took place in trenches, and this knife served as a weapon during those trench battles. This is why it is known as a Trench knife.
Now, let’s move to the shape and design of this knife. Generally, this knife was a combination of two different weapons. There was a blade attached to a knuckle duster making two weapons combined.
There was a long slender blade like a Italian stiletto blade. The handle included the knuckle duster. The soldier could wear it around his knuckles and use it for punching his opponents. Similarly, he could use the blade for stabbing and thrusting.
Trench knife was created by the US as well as Germany, but the aim was to make a weapon that serves the best in close quarter combat. During such combat, a weapon was required that was impossible to disarm.
Hence, this knife was created by the manufacturers specifically for the soldiers fighting in trenches and close quarters combat.

Brass knuckle knife is also known as as knuckle knife, and sometimes as a knuckle duster knife.
This is an advanced version of trench knife available in great numbers in the market today, If you head to the market or explore the online market, you will find an extensive range of these knives.
This knife does not have a specific design or shape. However, the pattern is similar. There is a knuckle duster as well as a blade. But, the length of the blade is shortened. Also, the handles are now more tactical and comfortable.
Today though, knuckle knives are not intended to be used only for fighting. They have been used for self defense against the attackers, enthusiasts just keep them in their collection, and some cosplayers use them during LARP as well.

History of the Trench Knife

When we explore the history of trench knife, we have to plunge into the details of World War I. This was where this knife was first established. The First World War was quite intense. Soldiers had to battle in close quarters and most importantly in trenches.
Now, in a close quarter and trench battle, the fighters engage in a brawl. Many weapons, such as real swords don’t work well here. But, a knife is the best weapon to fight in close quarters because it is easy and comfortable to handle.
In a close quarter combat, there is every chance that you lose your weapon because you get in a brawl with your opponent. Therefore, a knife that was easy to handle was the right choice in this regard.
Manufacturers did a wonderful job as they created the spectacular trench knife. They kept the needs of the soldiers in mind and also, realized what sort of weapon could be handful in trenches and close quarters.
So, keeping these things in mind they created trench knives for the soldiers, specifically for those who were battling in the trenches. The mechanism was simple, a knuckle duster was attached to a knife, or in other words, a blade was attached to brass knuckles.
The most popular trench knife was the Mark I created by the US manufacturers for their soldiers. The replica of this knife is still available in the market. And is one of the most popular items for collectors to add to their collections.
Plenty of trench knives were created during that period of time. Remember trench knives did not have one particular shape. A few of them had triangular blades, or long sender blades with needle-like points.
Stiletto knives were used for making these knives. One huge example is the M1917 Trench knife which had a stiletto blade attached to a knuckle duster. It was good for stabbing, thrusting and slashing actions.
Three nations that built these knives included Germans, Americans and British. However, the versions they created were different from each other. The trend of manufacturing and using these knives continued till the Second World War.
During World War I, trench knives were the primary fighting weapons. In the Second World War, though they were replaced by other weapons. But, still, trench knives served as secondary fighting weapons when primary weapons were lost.

The manufacturing of these knives never stopped and we eventually get to the modern-day trench knife i-e the brass knuckle knife. Remember the earliest knives were designed for fighting in trenches and close quarters. Hence, they had blades good for stabbing and slashing.
Today however, these knives are used for different purposes. They are no longer the primary fighting weapons. But, you would still see street fighters in America owning such knives. These are also being used as tactical knives and soldiers are often equipped with them.
Knuckle knives are also being used for self defense. In America, people are attacked randomly by the attackers. To deal with those random attackers, they want a solid and brutal weapon like this. It is impossible to disarm and extremely lethal with its powerful blade.
To conclude, I can say that trench knife is actually the traditional brass knuckle knife. Though there are plenty of variations you can find in the market today. The modern-day knuckle knives are more tactical in nature.
But, they are excellent as self defense weapons and fighting the attackers for survival. Are you a fan of this magnificent knife? Get some in your collection! 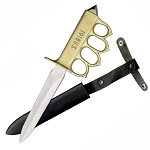 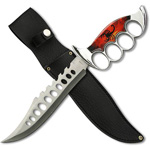 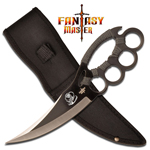 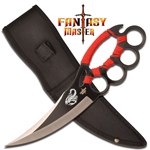 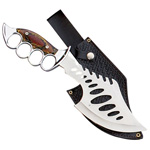