Kunai Knife - How to Throw a Kunai?

Knife throwing is an art, a skill and a technique. If you don’t master this skill, art or technique, don’t call yourself a good thrower. You can’ be good at it, if you are a beginner.
I have come across several people who regarded themselves as good throwers, but when they were asked to throw a knife, they were awful.
Throwing a knife is different from throwing a ball or any other material. You are less likely to hit the target unless you are an expert thrower.
A throwing knife is also different from a normal knife. It has a different features, greater sharpness, different shape etc. It is generally very difficult to throw it, in fact, throw it accurately.
There is a specifically designed throwing knife known as kunai. It is a knife often used for playing throwing games. Also, it is excellent for learning how to throw a knife.
If you want to become a great knife thrower, here is a complete guide to a kunai throwing knife. At the end, we hope to make you a capable knife thrower, considering you follow this brief guide.

It is important to know why you need to learn how to throw a kunai knife. The reason is you can engage in a popular throwing sport called knife throwing. 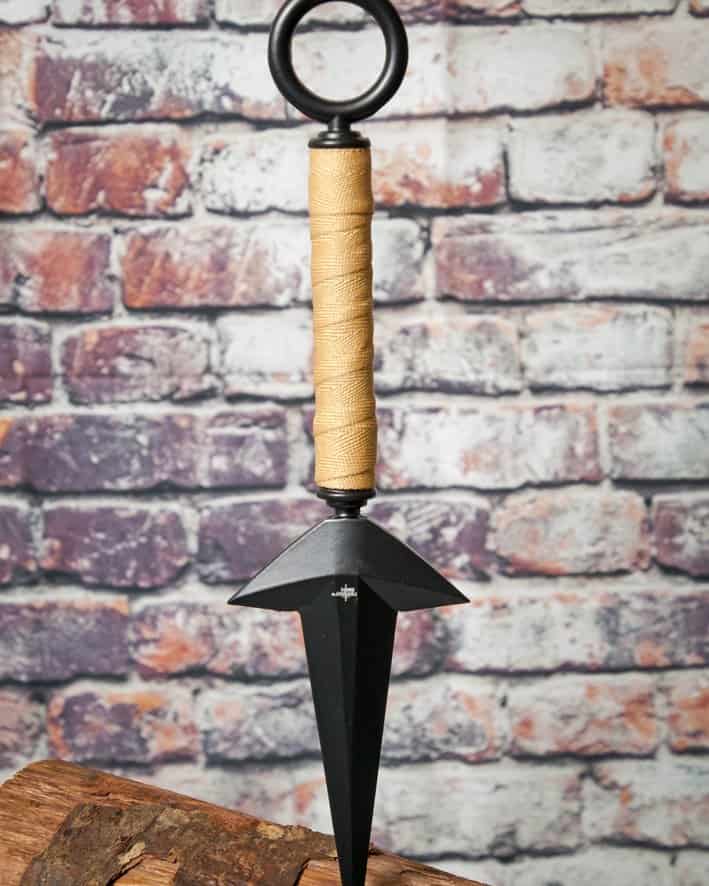 Knife throwing has now become a global sport. It is played all over the world, and some expert throwers take part in it.
It was earlier popular in Europe and America, but it has now expanded all around the globe. Worldwide competitions are held annually and monthly, and people from all over the world take part in it.
In this interesting modern sport, players throw kunai knives on target. A wooden target is placed, often round in shape, at a distance.
Thr throwers throw knives from a specified distance and try to hit the target. The best target is the circle at the most middle. The players need to hit that target to score maximum points.
An important factor is that the knife has to stick into the target in order to score a point. If it doesn’t, it is just a waste. So, you need to throw at a good pace so that it sticks into a wooden target. Generally, it does.
In the end who hits the target more often wins the competition. This is an enjoyable game, and to enjoy its thrill, you need to learn how to throw a kunai knife. Wait, why kunai?

There are several different throwing knives, but kunai is believed to be the best among them. It is basically a ninja knife, but the modern ones are different from the ones ninja used.
It is interesting to know that ninjas used these cool knives for throwing purposes as well. However, the aim was to injure their enemies, not to enjoy the sport.
Ninja are considered one of the smartest warriors who used different weapons in warfare to fight their enemies. One of their secondary fighting weapons was a kunai.
A ninja kunai knife was a small sized needle-like knife which had a sharp point. It was thrown on the enemies to cause slight injuries and get a tactical advantage over them.
However, today, these knives are used for throwing purposes only, and are no longer warfare weapons. These knives are preferred for throwing for a few key reasons.
First of all, kunai is designed in a way that it can easily stick into the target. It has a very sharp point which allows it to easily stick into wood. Remember, the target is a wooden one.
In addition, a kunai knife has a design which allows it to travel straighter. It provides better accuracy than all other throwing knives. So, these are the reasons that make it the most popular throwing knife in the world.

How to Throw a Kunai Knife?

Since it is a detailed guide for beginners, we have composed a list of steps that you need to follow. So, here is a step by step guide on how to throw a kunai knife:

Safety is extremely important. Before you learn how to throw a knife, make sure to learn the safety rules.
A kunai knife has a sharp blade, and it can be dangerous for you and your surroundings. Hence, to prevent injuries and dangerous incidents, follow the safety rules. Here are some significant instructions:
Blog Home
Categories
Recent Posts
Archives
SHOW SIDEBAR